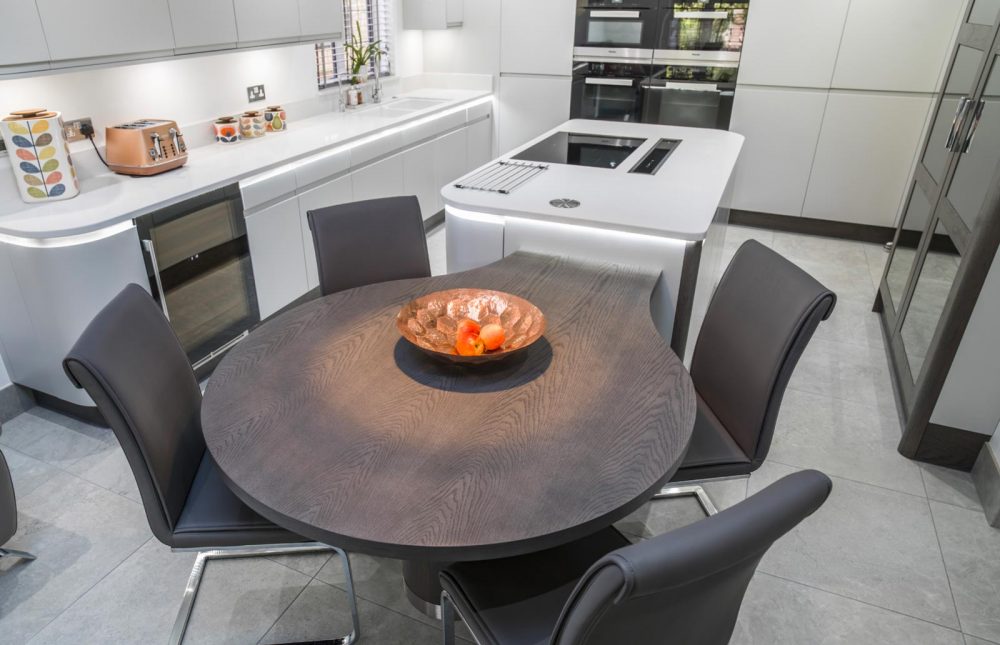 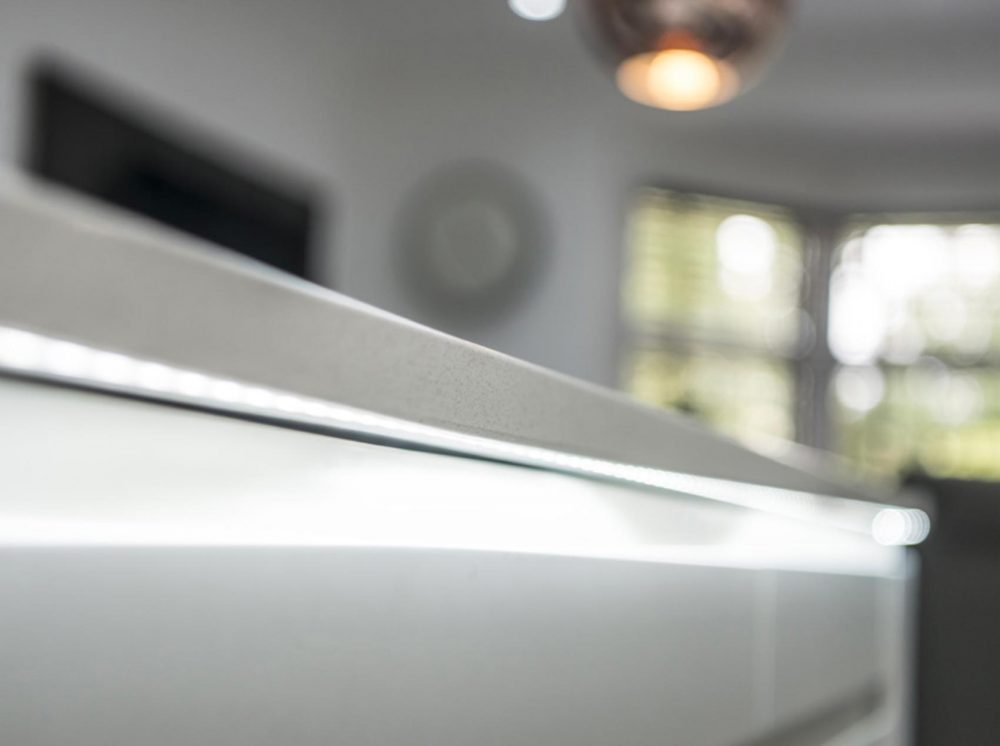 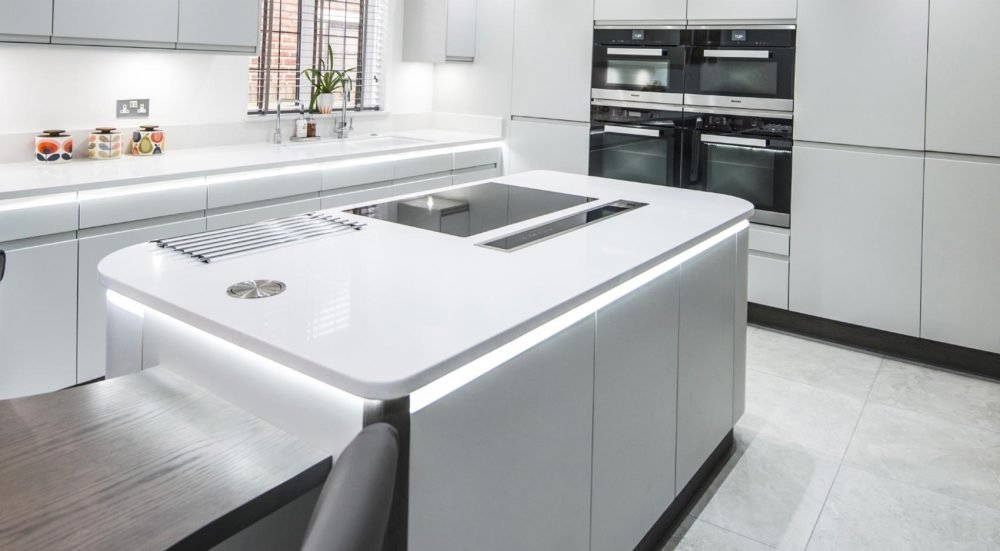 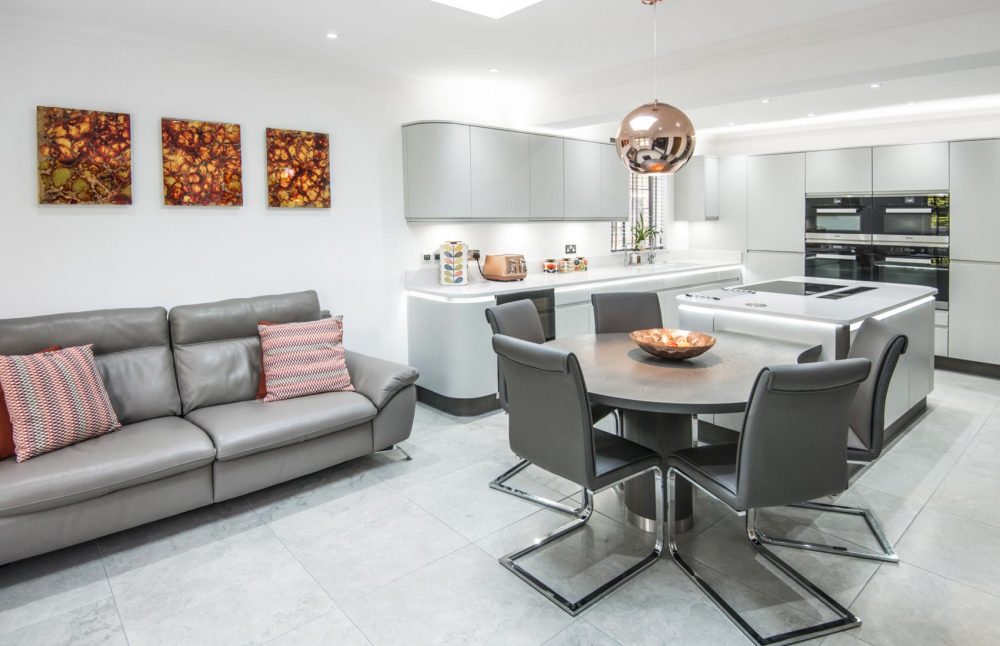 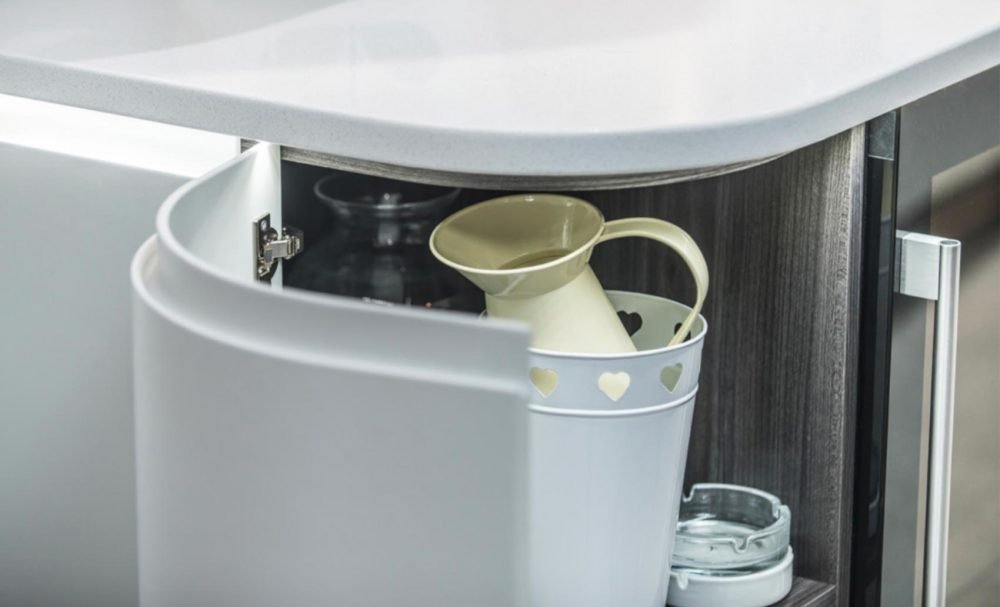 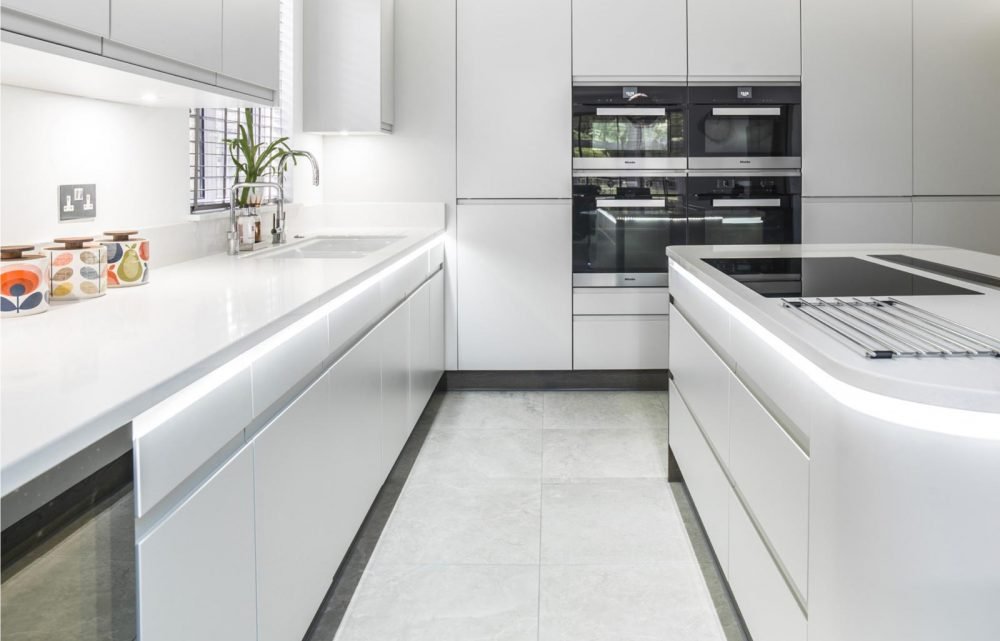 The brief:
Living in the leafy suburb of Petts Wood in Kent, Mr. & Mrs. Wells wanted to completely transform the kitchen of their traditional detached home. They were looking to create a contemporary and stylish open-plan living space with zones for cooking and relaxation, as well as a hidden office area for Mr. Wells. As keen cooks, the couple were eager to incorporate the latest technological appliances for a practical and functional kitchen, complete with cleverly integrated design details for a truly modern touch.

The solution:
The Wells’ came to Kitchen Design of Sevenoaks, a Stoneham Kitchen centre, to create their dream kitchen. After removing a load-bearing wall, blocking up two doorways and dealing with a fitted gas meter, the room was completely gutted and re-plastered to prepare for the arrival of the kitchen furniture and appliances.

Stoneham’s Flow range in Dove Grey was chosen for its smooth lines and uncluttered simplicity, fitting with the design brief for a contemporary kitchen. To enhance the predominantly neutral palette of grey and white, black-smoked mirrored doors, table top and a drum unit were made in Anthracite Oak, adding modest touches of colour and character. The black-mirrored doors also concealed an office area in an existing recess.

To make the most of the space available, a kitchen island and table top were connected to create one elongated unit, forming a unique focal point which is elegant and practical. Both feature gentle curves, softening the surrounding linear elements and giving the illusion of a more spacious room. With quartz worktops in Princess White, the kitchen island features a flush-fitted extra wide induction hob and integrated downdraft extractor, which appears and disappears at the touch of a button.

The Wells’ certainly embraced technology in the kitchen; four state-of-the-art Miele built-in ovens (two multifunctional, one steam and one microwave) form a striking square on the back wall. To the left, a ‘U’ shaped chrome tap sits adjacent to a Quooker boiling water tap, which provides a stylish and modern alternative to a kettle. Cool white LED tapes and drivers under worktops and fitted, dimmable LED lamps in the ceiling give the Wells’ scope to change the kitchen’s ambiance at the flick of a switch.

Months after completion, both Mr. & Mrs. Wells are still delighted with the kitchen, stating that they “wouldn’t change a thing”.

For more information on Kitchen Design of Sevenoaks click here.