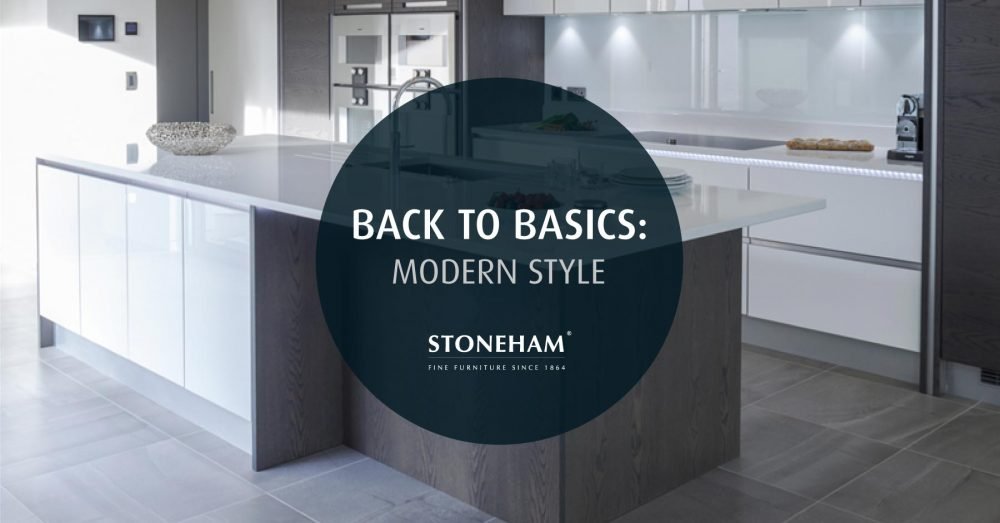 Back to Basics: Modern Style

Modern design, is actually a misnomer – it’s not modern at all, finding its roots at the turn of the 20th century. What is now recognised as modern style, emerged from German and Scandinavian architecture and was inspired by the practicality of the Age of Machinery, reaching its peak in the 1950s.

Frequently, confused with contemporary design – which we will be exploring in our next blog – modern style is underpinned by the concepts of simplicity and functionality, two qualities which correlate with many kitchen design trends of today.

We’ve highlighted the key features of modern style, giving you the foundations to create your own interpretation of a modern style kitchen.

FUNCTIONALITY
A fundamental feature of modern style is that functionality motivates all design decisions, meaning that everything has been built and chosen for a purpose. ‘Decorative’ is a forbidden word, and any item which doesn’t have a role in the running of a kitchen is banished – wave farewell to knick-knacks and ornaments!

CLEAN LINES
Modern design is not clutter-friendly, favouring clean lines for a super-sleek aesthetic. Form is inspired by the geometric, with straight sides and sharp edges, making rectangular, square and other linear shapes a popular choice amongst homeowners. For a modern kitchen, create uninterrupted silhouettes with handless, integral J or sleek handles cabinets and drawers, flush-surface extractors and integrated LED lighting.

NEUTRAL
The colour palette is decidedly neutral, reflecting the sentiment that ‘less is more’. Lighter colours – such as beige, cashmere, taupe and white feature heavily in modern design, with the intention of creating airy, open spaces. Darker shades can also come into play; think charcoal greys, espresso browns and black appearing as accent panels, enhancing the aesthetics. Smaller pops of bolder colours can be used in moderation, by adding touches of brightness with kitchen accessories, accent trims or singular pieces of furniture.

MATERIALS
Modern design is a celebration of natural materials, helping to add texture and warmth to what could otherwise be a clinical environment. There is heavy use of unpainted wood, natural fibres, wool and leather, as well as reflective materials such as glass and metal to inspire a sense of open space. Glass splashbacks, angular steel extractor hoods or wooden cabinets are all ways to make your kitchen modern.

Keep an eye out for our next blog, where we’ll be clarifying contemporary style.