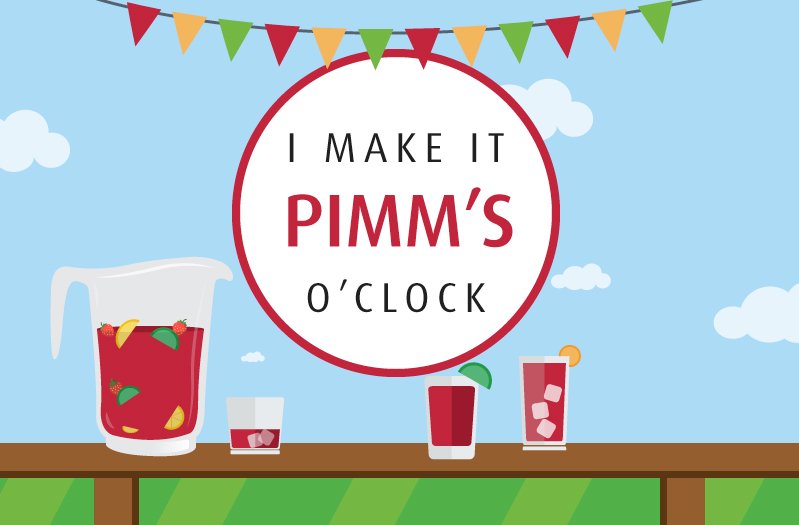 “My cup runneth over” is not a common reply in response to “Another glass of Pimm’s?”. Rather, the public can’t seem to get enough of this tawny-coloured tipple, which fills multiple pitchers at any and every self-respecting British summertime social occasion. The photogenic pick-me-up is a summer soirée staple, gracing granite kitchen worktops and garden tables up and down the nation.

Traditionally a long drink, Pimm’s is most often mixed in a high-ball glass, filled to the brim with a blend of ice and vegetation. It has both substance and style, as the addition of prettily coloured fruits and herbs are both aesthetically-and-palate pleasing, serving to enhance the distinctive flavour of this centuries-old British beverage.

PIMM’S PAST
Indeed, Pimm’s is as deeply steeped in history as Pimm’s-soaked strawberries are steeped in the infamous liqueur. It was concocted in 1823 by a Mr. James Pimm, who was a 19th century oyster bar owner in London. Originally marketed as a ‘digestion aid’, the gin-based tonic is laced with other mystery ingredients and infused with a clandestine blend of herbs and spices. Although the exact proportions are a closely guarded secret, it’s speculated that Pimm’s is a heady mix of gin, red vermouth and orange curaçao (Cointreau).

The aptly named ’No.1 Cup’ soon bore its inventor the sweet fruits of success, and following an upscale in production, Oyster Bar owner Pimm sold on his pearls of wisdom (and the trademark) in 1865. There were subsequent changes of hands throughout the decades, which saw the creation (and withdrawal) of several new ‘cups’ – No.2, No.3, No.4, No.5 & No.6 – based on alternative alcohols, such as brandy, vodka, whisky and rum.

Currently, the Pimm’s No.1 cup is the brand’s main offering to market, with side-line products tweaked to meet modern market demand. Pre-mixed Pimm’s and Lemonade tins are a summer staple, and fruitier variations, such as blackcurrant & elderflower, or strawberry & lime are popular amongst picnickers.

GAME, SET, DRINK!
Pimm’s has become inextricably ingrained into the very fabric of British Summertime, and nothing represents the marriage of the two better than its association with Wimbledon. With the elite tennis tournament and the Pimm’s both classed as the epitome of “Britishness’, the fruity concoction has taken up permanent residence on the Wimbledon drinks menu.

It’s thought that over 320,000 glasses of the sweet stuff will be consumed at this year’s tournament, with a specially designed ‘Pimm’s On the Hill Bar’ quenching the thirst of tennis-loving spectators. And, in 2017, Pimm’s previously retired No.6 Vodka cup will also be available alongside the traditional summer cup.

HOW TO MAKE A PROPER PIMM’S
The ‘perfect’ Pimm’s, accordingly to expert mixologists, is a matter of taste. However, if you’re a die-hard traditionalist, a classic Pimm’s is one part Pimm’s to three parts lemonade, accompanied by strawberries, orange slices, cucumber, mint and chilled with a generous handful of ice.

If you’re thirsty for something a little off-road, there are several recognised deviations from the classic. Ginger ale replaces the lemonade for a Pimm’s Ginger (spicy and drier), or supplementing the neat stuff with a mix of cranberry and orange creates a Pimm’s Deuce. For a hi-brow brew, the addition of champagne (or sparkling white wine) bequeaths a Pimm’s Royale to parched patrons. Our personal favourite, is ‘The Pimmlet’; cute by name, but cut-throat by nature, as more gin ramps up the alcohol content to new levels of deliciousness.